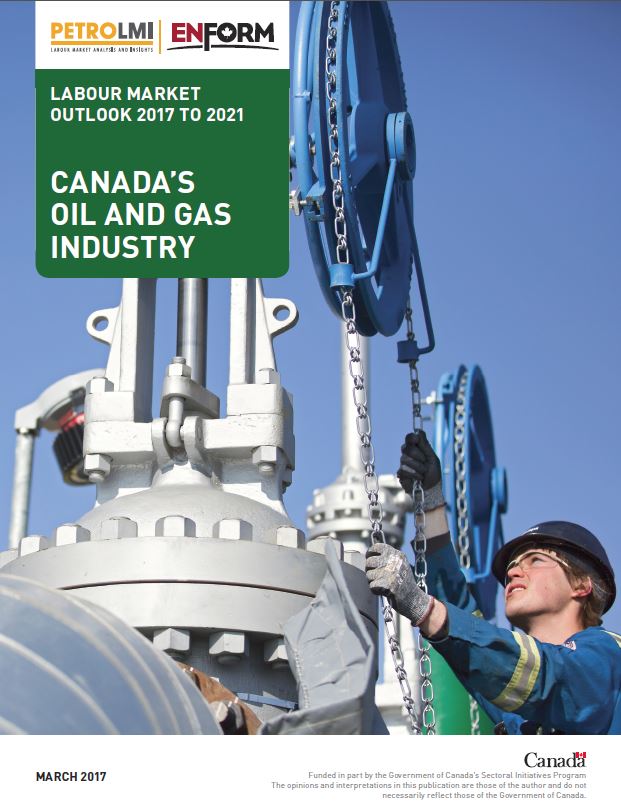 Today we released our latest report, Labour Market Outlook 2017 to 2021 for Canada’s Oil and Gas Industry. The report provides labour market projections for the industry based on two scenarios, one if oil prices stabilize well above US$50 per barrel (/bbl) through 2017 and beyond, and one if oil prices retreat well below US$50/bbl.

“The year has gotten off to a good start, with activity and hiring picking up, particularly in the services sector. In fact, some of these companies are already experiencing a shortage of skilled workers with substantially more drilling rigs operating as compared to this time last year. If oil prices remain stable and more favourable market conditions persist, a modest five-year job recovery will begin in 2017,” says Enform’s Carol Howes, Vice President of Communications and PetroLMI. “If oil prices drop back for any length of time then many oil and gas companies are expected to delay more of their investment.”

Based on the assumption that average oil prices stabilize in 2017 and increase steadily to 2021, the industry will require more than 17,000 new workers during the period, amounting to a Modest Recovery scenario. If oil prices slump and renewed activity slows, industry is expected to shed additional jobs in 2017 and overall employment growth will slow. In a Delayed Recovery scenario, the industry will create about 6,700 new jobs during the five-year forecast, according to the report.

More than 52,500 direct jobs were lost in Canada’s oil and gas industry in 2015 and 2016, along with thousands of indirect jobs in oil and gas related construction, manufacturing, transportation and other technical and business sectors. At the end of 2016, the oil and gas industry directly employed an estimated 174,000 workers, 25% fewer than at the industry peak of over 226,000 in 2014.

Based on production and investment projections for both of the report’s scenarios, an estimated annual average of 510,000 to 550,000 direct and indirect jobs will be supported by Canada’s oil and gas industry between 2017 and 2021. Indirect employment growth will be geographically widespread as the industry sources goods and services from across Canada.

“A shrinking labour pool and a shortage of skilled workers is a concern, especially if renewed hiring is delayed another year to 2018,” says Howes. “As a result of the downturn, many displaced workers are looking to find jobs in other industries, and, there are fewer new entrants including graduates choosing to pursue a career in oil and gas.”

Labour Market Outlook 2017 to 2021 for Canada’s Oil and Gas Industry focuses on direct employment within key industry sectors, including conventional exploration and production (E&P), oil and gas services, oil sands and pipelines. Each sector is impacted differently and has its own unique challenges over the duration of the forecast period.

While oil and gas activity occurs in 12 of Canada’s 13 provinces and territories, regionally the areas that are expected to benefit from new direct employment are those in Western Canada with reserves that are cost efficient to produce – that is, those that respond to technologies such as multi-pad horizontal drilling and multi-stage hydraulic fracturing and that have established infrastructure, including roads, pipelines and processing facilities.

The report also provides workforce projections for key occupations. In a Modest Recovery scenario, industry will experience hiring challenges beginning in 2017 but in both scenarios, hiring challenges are expected in 2018 and 2019 for occupations such as geologists and geophysicists, petroleum engineers and technologists, purchasing managers and agents (including landmen), trades, oil and gas drilling and services operators, as well as labourers.

An aging workforce could also add to the industry’s workforce challenges. About one in every 10 workers is eligible to retire within the next five years, amounting to 4,000 potential retirements in 2017 alone. That said, companies surveyed for the report noted that not all job vacancies resulting from retirements will be filled; replacement will depend on the position, the type of work and alternate options to accomplish the job.

“While the industry is on a path to some job recovery, even with some retirements the industry is not expected to fully regain all of the jobs lost in the last two years,” says Cameron MacGillivray, President and Chief Executive Officer of Enform.

“Heading towards 2021 and beyond, accessing world markets via new pipelines will be critical for full job recovery. Equally important will be investing in technology, innovation and a highly-skilled and technical workforce to sustain the productivity and efficiency gains achieved in the last few years. These things will be critical if the industry is to compete globally and make a transition through carbon regulations.”

PetroLMI’s labour market reports are available, for free, at careersinoilandgas.com.

Funded in part by the Government of Canada’s Sectoral Initiatives Program.